Your clothing and equipment must correspond with material culture in the area around the Baltic sea during the mid-14th century. We happily approve of well-worn equipment – the Danes have supposedly been in the field for two years, and the Gotlanders would probably not have had access to particularly new equipment.

Everyone participating in the battles shall dress as, and appear as, men.

If you are reenacting a period post-1361, you will need to adjust your armor so it will correspond to the conditions in 1361.

For example, you should:

– Remove globulus breastplate or cover it with a surcot.
– You may fight wearing plate arms, but we encourage you to go to battle in chainmail instead.

The fighting rules have been adapted to allow fighters to wear light armor – as was probably the case for the common Gotlander.

Clothing
The colors of your clothes should be possible to produce using plant dyes. Modern body adornments, haircuts and unorthodox hair colors must be covered. Modern glasses are not allowed.

Fighters should wear woolen hose, some kind of kyrtle/tunic/doublet made from wool OR a gambeson. The only shoes allowed are medieval-type turnshoes.

This group will never be in any direct fighting. As a member of this group, you will make the battle seem more realistic by adding more people to the battlefield.

This category will never be in any direct fighting. They may, however, get hit by arrows. In this group there may be crossbowmen, bowmen, couriers, water carriers or soldiers as extras.

Equipment
– 14th century clothing/equipment. Helmet or a mail coif with padding. Exceptions for weapon specifications (read more under heavy infantry) are only allowed if approved at muster.

According to Swedish law it is prohibited to use crossbows against humans, even when arrows are blunt. Because of this, crossbowmen will only fire towards areas not occupied by people. If you are interested in participating with a crossbow, please contact Thomas: thomas@battleofwisby.com

– Arrows must have good quality rubber blunts, which must not be fitted over any kind of metal head.
– All arrows must be inspected by an official inspector prior to the battle. Arrows must be inspected continuously by the shooter and the unit leader to make sure that the rubber blunt has sustained cracks or damage. If the arrow is damaged it must be broken off or put away.
– The arrows of a bowman should be identifiable by a personal mark – otherwise it will be impossible to tell which arrow belongs to which shooter in the end.

Both sides will present a mounted force. When you apply for the event, tell us which side you would rather be on. We will do our best to meet your specifications, based on your skills, your horse and your equipment.

The participants in this category will take active part in the fighting.

– When facing an opponent who is wearing an open helmet, you are not allowed to fight with your visor down. A lot of people will have open helmets, and if all visors are up, visibility will improve greatly. Furthermore, you will probably be a bit more careful when engaging your opponents. All in all, this means a safer fight.
– You may not engage non-combatants, light infantry or horsemen unless specifically ordered to, and unless you have practiced this beforehand.

All helmets must protect the upper part of the head, including the temples. Helmets should be worn with some form of padding inside. A mail coif (even a padded one) is NOT considered a helmet. Kettle hats with vision slits are not allowed.

As a minimum, gauntlets must be padded and reinforced with heavy leather on the back of the hand, the wrist and all fingers, including the thumb.

Weapon dimensions and types
No weapons can be unnecessarily heavy. They must be in good condition, and all notches on point and edge must be filed down. No sharp weapons of any kind are allowed on the battlefield.

It is every commander’s responsibility to make sure that these general rules are followed.

Edge: 3 mm. Corners: 18-20 mm. Point diameter: 8 mm. Pollaxes of the type pictured below (or similar to it) are not allowed, as they are from a much later date than the period we wish to recreate. 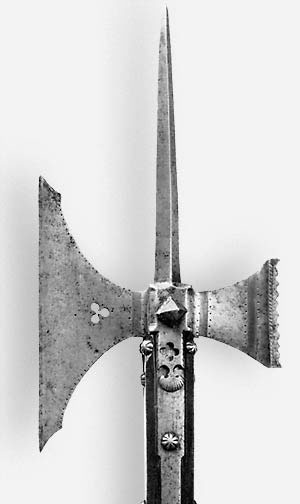 The wings/edges of a mace must be at least 3 mm thick. Spiked clubs are not allowed.

Flails and other weapons with a chain/cord

Must be made in such a way that it will not splinter in any way when it receives thrusts and cuts. Plastic or metal are not approved as materials (but metal bucklers are allowed). Bucklers should not have a diameter exceeding 55 cm.