On Saturday the 10th of august 2013, the battle of Wisby will be reenacted once again.

What we know about the battle:

– 1185 skeletons have been unearthed from the mass graves outside Wisby.
– The franciscans of Wisby mention that 1 800 peasants fell in the battle.
– There is a stone cross that commemorates the battle. It was probably put up in relative conjunction to the events.
It bears an inscription that mentions the dead Gotlanders.
– Other sources mention the battle.

There are many stories and legends about the battles of 1361. One of them mentions that the burghers in Wisby kept the city gates closed, and refused to let the peasants in. We do not know if this is true or not. It might just be that the Danish forces were already in place, blocking the path for the Gotlanders, and forcing them to fight outside the walls.

In our scenario, the Danes have arrived and the Gotlanders are forced to make a stand outside the city.

The battle as reenacted in 2011 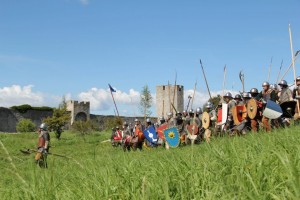 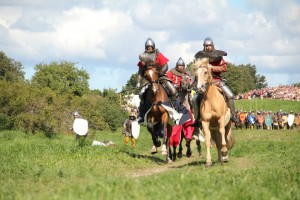